What is a Shotgun Wedding? 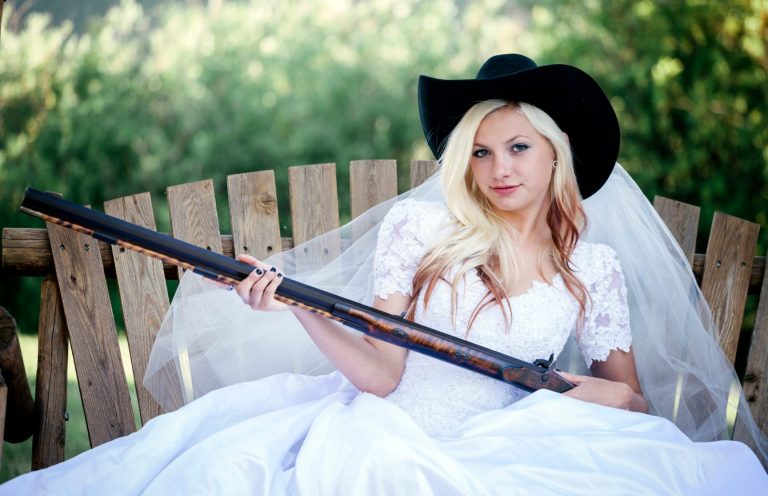 There you are watching that old western movie, it’s the wedding scene, you have the
bride and the groom at the front of the altar, and then you see the father of the bride staring down
at the groom with a large shotgun. That tall silver piece of metal very quickly becomes the most
eye-catching star on the screen. The father stares at the groom menacingly, the “I do’s” are said,
and we have a newly married couple. Talk about dramatic! So what’s up with that shiny piece of
metal? Welcome to the infamous shotgun wedding!

So what is a shotgun wedding exactly? Well, it isn’t just a wedding with a shotgun
present, otherwise, a lot of Southern weddings would fall into this category. A shotgun wedding
is when a couple has to be married in a hurry, 99% of the time due to getting pregnant outside of
marriage. A shotgun wedding is usually pushed by the parents of the bride to try and bring back
some honor to their daughter and for her, along with the child, to have some kind of protection.
So to make sure that no child is born “illegitimately” here comes the wedding bells. While this
isn’t a very common thing for our day in age, there are still rare occasions where it does
happen.

On the high society side, there are quite a few celebrity couples through the years that would
classify as having a shotgun wedding. Ben Affleck and Jennifer Garner got married fairly
quickly and had their first child together six months later. Reese Witherspoon and her ex-husband, Ryan Philippe, married young and had their first child together only three months after
tying the knot. Jessica Alba and her husband Warren are one of the few long-standing shotgun
wedding couples. They were on and off again for a couple of years but then officially settled
down after the news of Jessica’s pregnancy and have been married ever since.

So, do shotgun weddings stand a chance to succeed, or do they have a ticking time bomb
attached to them? Sadly, not a lot of these coerced marriages stand the test of time. The basis for
the ones that did was that the couple truly loved each other before the pregnancy even occurred.
If the couple was in love then there was a way larger reason to stay together than just the
financial and familial obligation. There was a noticeably higher rate of people that stayed
together if they got married at a younger age.

Shotgun weddings are now used as more of a joke at weddings instead of real-life
occurrences. The father of the bride will walk down the aisle holding a rifle in jest to get a laugh
out of everyone attending. If you are wanting your own version of a shotgun wedding, find that
crazy uncle or brother to play the part and whether it is a really “shotgun wedding” or not, you
are sure to have your guests talking about your wedding for years to come.